I have just added another story Tour of Duty and my latest guest blog for The Daily Blog,  Cultivating Tragedy: The Culture of WINZ to the list of pages on the right.
I have also received the spectacular news that I have had a short story accepted for the next edition of  Landfall. The story is called Baggage and it is from my second collection of short stories.
My first collection of short stories is called The Whore Next Door. The stories Georgie, Aimee, Lola and Eve are all from this collection. It consists of twenty-four stories about women working in the sex industry. While each story is independent they are all loosely threaded. This tenuous  connection replicates the  threads that bind the woman who work in different aspects of the sex industry. While they encounter the  same obstacles and discrimination they may never meet or their paths cross. Their stories are not woven together but instead are threaded like cultivated pearls from an estate sale. A beautiful but damaged choker that could disintegrate at any point.
Baggage is from my second collection. It is still in development. I will not post the story on this blog until it has appeared in the journal. I still treasure hard copy and pay homage to anyone willing to publish me in that form. I am trying to encourage people to engage in a medium you can rest a cup on, sniff and fall asleep with.  If we don't use it, we will loose it. Point and Shoot and The Tale Wagging the Dog are part of the same body of stories. The working title of this collection is The Fourth Wave. I chose the title and started working on the stories after I read an article on Facebook about the new 'fourth wave of feminism.'

I am sceptical of the new wave the article referred to. The movement seems to be a social media movement. It certainly is not reflected in what  I  encounter in my daily life as a mature student on a university campus. What I encounter at Massey's Albany campus among the younger students is women who don't identify as feminists and a curriculum that no longer has women's studies.  Ironically the fourth wave post was  followed by another post form the Tumbler site Women Against Feminism. It showed a young woman holding a sign stating why she didn't need feminism. 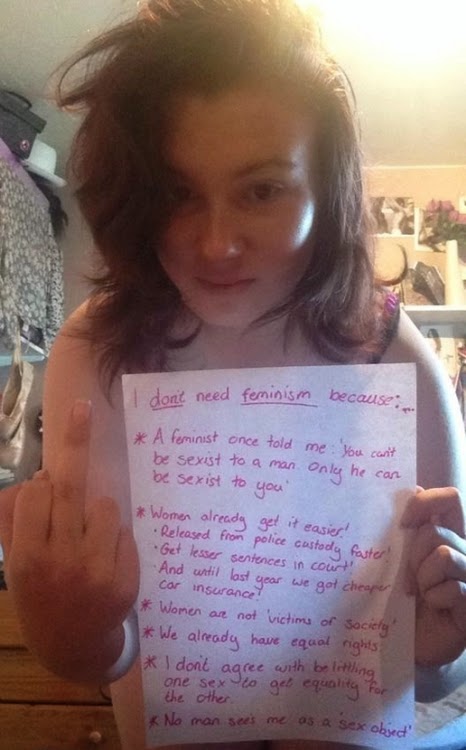 It got me thinking about the state of feminism. Where is feminism now and how is it present in the social media / snap chat world? Where is feminism in my life, a widowed woman of forty five, and the daily lives of my friend's? Where is this 'fourth wave' and how can I catch it? If I look at my own claim to feminism in the mirror, what is really looking back? ﻿ 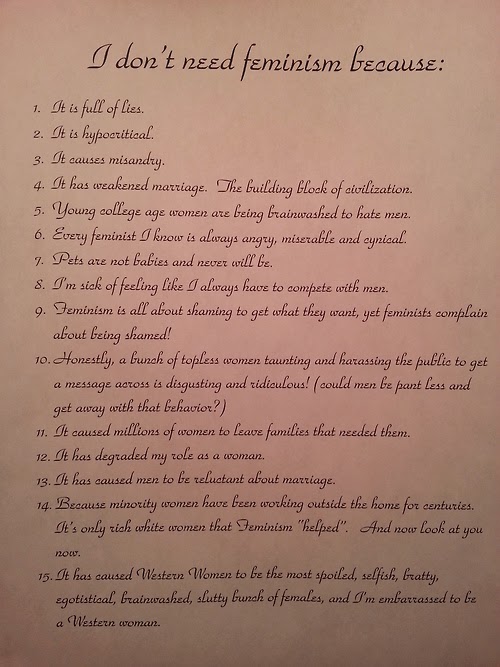 Posted by The Red Rabbit Writes at 04:55