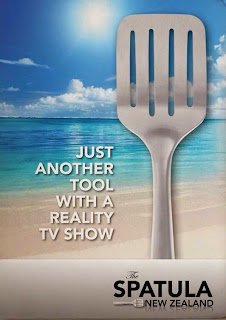 It’s been an unsettling and frankly, a slightly frightening, sort of day. Everywhere I went I couldn’t help but notice the women of New Zealand glancing over their shoulders and nervously tucking their pony tails from view. Some had obviously opted for safety and there was many a wrist adorned with a now surplus hair tie. Some had embraced the bun. There are even as yet unsubstantiated reports that in Epsom the opposite trend has occurred and pharmacies have been run off their feet, selling out of hair ties and even scrunchies! There are rumours that some desperate conservatives from deep within the leafy burbs are even sporting pony tail extensions.

What a relief it is to be off the streets and safe from tugging, ogling and of course the risk of the rear approach in close quarters escalating to all out frotting. The message from the capital is that it is all just good fun and games, but until everyone gets the joke it is nice to chill in front of some harmless telly. What could be more reassuring for the women of Aotearoa than watching a show where women are made to compete for affection or get cast out onto the mean streets without a beefy bachelor to guard their tantalizing tails! I’m so excited I might just trim my split ends with nail scissors.
There are now only five contestants remaining. It should be noted they are all blonde and all have long hair. Many of them sport ponytails. I wonder which #team the Prime Minister is supporting?
#TeamPoppy has the longest hair.

They have all pashed Arty apart from Matilda. She will have to make out with him or she will have to go. It’s time for her to give it up and raise the bar.

Obviously when he says connection what he really means is a hard on. Which is nice isn’t it? Sex and hair are what’s important in relationship with men like Art. If the lady girls have short hair it might mess with his preconceived gender constructs and challenge his masculinity. If women start having short hair where will it end? How will people like Art be able to identify feminists and lesbians? Matilda got a bracelet. She can put it on her possibly broken wrist. Now she must kiss him as payment. So she does. Art is feeling really, really connected to Matilda right now.

It’s time for a group date of two. That’s not really a group. The date is for Danni the hot favourite and Alysha. Alysha must be bummed. They are off fishing. (Again with the metaphors! Too easy. It would be cheap) Danni required a game belt for a snapper and Art clearly knows nothing about fishing at all mistaking an undersized snapper for a kingi. Art and Danni start getting it on. Alysha feels awkward. The way I look at three isn’t a group date but it could be a ménage a trois. If Alysha had any initiative at all instead of debating whether or not to kiss Arty she should have just kissed Danni. Then Arty would have been happy, the producers would have been thrilled and let’s face it she probably would have won.

#TeamAlysha would have been trending.

Alysha doesn’t jump in but instead opts to kiss him when he’s finished kissing Danni. He takes her to the same spot on the beach where he made out with Danni. It is so romantic. It’s probably still warm from Danni’s hot arse.

Tonight Arty opts to send home the tall one that was framed as the baddy. She didn’t actually do or say anything bad in fact none of them really have. This is a little like watching a cage full of sloth. Cute but slow. I was surprised I thought Alysha would go for being really sincere and boring or Poppy. I thought Poppy might go because after tonight Art is off to meet the families. There is no budget for a trip to England! Luckily it appears Poppy’s family have immigrated. Poppy is still in the race for second runner up!

Arty Green reminds me of someone else. It’s been bugging me all night. He reminds me of some other well-known New Zealand male who comes across as affable and gormless and treats women like pets? You know what I mean, he expects women to perform tricks, rewards them with the odd compliment and the occasional playful pat and ply’s them with wine while revelling in his own sense of entitlement?

I wonder where guys like Art get the idea that it’s okay to act this way.